Did you know that in Australia, in 2017, there are still a large number of schools that require girls to wear skirts and dresses as formal uniform? Yes they allow girls to wear shorts for PE, but for the other days of the week girls are required to limit their movement due to wearing dresses and skirts. There are a number of reasons why girls should have the choice of shorts and pants as part of their every day school uniform. These include: 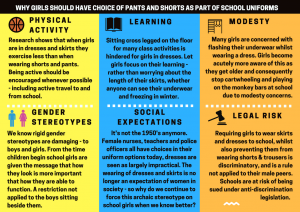 In early January, 2017, I published an article in The Conversation about girls’ school uniforms, asking why we still make girls wear skirts and dresses to school? The article was read by over 120 000 people, and I was contacted by a range of parents across the country.

Most notably I was contacted by Simone Cariss, a mother from Victoria who had started a petition after her daughter had been refused the right to wear pants to school. Based on the overwhelming response to Simone’s petition, which sits at over 20 700 signatures, and the outpouring of support that came from my article on The Conversation, Simone and I co-founded a national group to tackle the issue of girls’ school uniforms.

The Girls’ Uniform Agenda website provides a range of resources for parents and students who wish to make changes in girls’ school uniforms. If you wish to raise this issue with your/your child’s school, you can download and edit our ‘letter for the principal’ and information sheets. In addition, we have detailed the relevant legislative acts and  Education Department policies for each state, and outline arguments that can be put forward to support the rights of girls to have school uniform choices. We also provide detailed arguments that can be used to counter those who may oppose offering shorts and pants for girls.

In refusing to allow girls choices in girls’ school uniform options, schools in many states are contravening their Education Department’s policies. We argue that all schools that force girls into skirts and dresses without the choice of shorts and pants are also contravening state and federal anti-discrimination legislation.

The Federal Sex Discrimination Act 1984 defines direct discrimination as occurring when someone receives less favourable treatment on the ground of a protected attribute (such as sex) in circumstances that are the same or not materially different. It can be argued that girls are being treated less favourably than boys by not having access to shorts and long pants and the freedom these items allow.

Girls’ Uniform Agenda seeks to place pressure on Education Department’s and individual schools to bring their girls’ school uniforms into line with current policy and community expectations. We also aim to empower girls and parents across the country to request uniform changes in schools where the rights of girls in this area are not being upheld.

To add your voice to the call that all schools offer girls the choice of shorts and pants as part of their every day school uniform you can:

Girls’ Uniform Agenda is on a mission to change girls’ school uniforms, so that all girls in all schools have the option of shorts and pants. All girls should be able to choose from uniform options that they feel comfortable in. I asked in my article published by The Conversation why we still force girls into skirts and dresses at school? I’m still waiting for a reasonable answer. Of course, there isn’t one, and if Education Department’s and State Government’s won’t enforce policy and legislation, it will come down to Girls’ Uniform Agenda and parents and students around the country to get this done!