In 2015, my son started at our local Prep to Year 12 public school and my husband and I joined the P&C. At our first meeting, we mentioned that girls in junior school (from Year 1) were not allowed to wear shorts and a shirt, and we asked if this could be discussed by the P&C over the coming year.

My daughter would be due to start Year 1 in 2017, and would be required to wear the dress as her formal uniform. I found it bizarre that she could not also wear shorts and a shirt like her brother, and I assumed (mistakenly) that most people on the P&C would also find this odd.

It became clear very quickly that the P&C (made up of around 15 parents out of a student body of 750) did not support any change to the uniform. In addition, the school leadership team did not seem overly keen to make changes.

Despite this I pushed on and asked the school to survey the girls and their parents to see if there was a desire for a change. The school did agree to survey the girls in Year 4, 5, and 6, and 51% of the girls said they did not like the dress. Many commented that it was uncomfortable, meant they couldn’t run and play, prevented them from doing handstands and cartwheels, and was hot, particularly with bike pants underneath.  An overwhelming 81% of girls said they would wear a short/skort and shirt option if one was available.

I was very excited about these results and figured that now, the P&C and school leadership team would work toward adding a shorts and shirt option for girls. However, the principal said he doubted the validity of the results (even though it was his deputy principal who did the survey), and the school decided not to make any changes.

I was devastated and angry. I went to many P&C meetings armed with research and statistics. The P&C president removed me from the P&C agenda so that I could not raise issues, and the principal said that he would not talk about the uniform anymore. 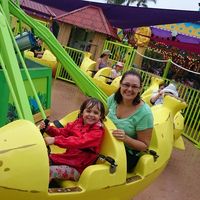 The DET policy outlined that schools in Queensland must offer “gender neutral uniform options to all students”. The principal stated that because of this he was required to change his uniform policy, and he made clear that he was not changing his policy for any of the reasons I had outlined.What the school did, to make their policy ‘gender neutral’, was remove the words “boys” and “girls” from their uniform policy. In effect, they changed nothing. No shorts and shirt were introduced for the girls, and any girls who wanted to wear shorts and a shirt were required to wear the boys’ uniform. The school resisted telling parents about this change, and did not talk the change over with the student body.When I attempted to post the new uniform policy to the school’s Facebook parents page, outlining the changes and what they meant (girls can now wear shorts and a shirt), the post was removed by the P&C president and I was blocked from the parents page.

When I bought my daughter’s Year 1 uniform, I was told that girls have to wear the dress, and only boys can wear the shorts. I told the uniform supplier that this was not the case, and that girls could now wear the shorts and shirt. I went into the uniform supplier’s shop on two more occasions, and each time I was told only boys could wear the shorts. When I did finally purchase the shirt for my daughter, it came in a package with BOYS SHIRT written across the front in massive letters.

For me, that was the last straw. I realised that I could no longer be a part of that school community, and my children left that school. They now attend a school where girls can choose between wearing a dress, skort, shorts or long pants. It turns out it’s not that hard to allow girls choices.