My name is Gabrielle I am the parent two very different and very independent daughters.  My eldest daughter’s name is Anja and she’s always been a child who has not conformed to others’ expectations of her.  This is why I care about girls’ school uniforms.

Anja identifies her gender identity as demi-girl.  As a result of this Anja has always chosen clothing, activities and interests that do not conform to the societal norms for females.  When Anja read the uniform policy of her public secondary school she was very concerned that she would be forced to wear clothing (dresses, skirts and hosiery) that she finds inherently uncomfortable, impractical and somewhat alien to her experiences and identity as a person. 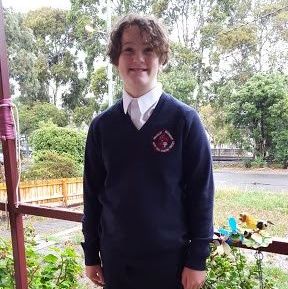 The only way Anja would be allowed to wear clothing she was comfortable in was, for us as her parents, to seek an exemption on cultural grounds – a seemingly difficult prospect for a middle-class, white, atheist family.  This is an excerpt of the letter we wrote to Anja’s school that resulted in her being allowed to wear gender neutral clothing:

“We strongly believe in the principles of equity and belonging that the school was trying to achieve through the application of a standardised uniform policy and supported this wholeheartedly.  However, we have a cultural objection to the gendered nature of the uniform and the requirement for gender specific clothing, based on the perceived biological gender of the children and are requesting an exemption to allow Anja to wear gender neutral clothing.

We are therefore requesting that Anja be given an exemption to the College’s uniform policy requirement for gendered clothing as the uniform policy is contrary to our belief that children not be limited in their choice of clothing purely on the basis of their gender.

We have attempted to raise our children in an environment where gender identity is not determined through biological sex, societal norms of clothing, objects (primarily toys), occupation or activities – be it play, sport or chores in the home.  We have actively taught our children that clothing, objects, occupation and activities do not have an inherent male or female orientation and that they are just things.

We also are concerned that the College uniform policy sends a message to children that they must conform to a fixed binary gender construct.  Thus reinforcing the pervasive societal attitudes of required gender conformity to the normative of male and female, with alternatives to this being unacceptable.”

After a small amount of negotiation, Anja’s school allowed her to wear the shirts, shorts and trousers when she started year 7 at the beginning of 2016.  She was the first, and now not the only ‘girl’ to wear the shorts and trousers.  Anja had some hassles from older children about her clothing choices. Her response was to ask them “Why the fuck do you care what I wear?” – most couldn’t and didn’t have an answer.

Anja’s school is currently reviewing their uniform policy – hopefully it will result in a non-gendered uniform.

I am very proud of my daughter, that she is strong enough to stand up for herself at such a young age, for what she believes in, and for the other young women who might not have the same courage or family support to swim against the tide.