Persistence, support, and why your voice matters; three things that have come out of fighting for the right for girls to have uniform options.

When I first voiced the question of why there was no choice of uniform options for girls other than a pinafore or skirt at our school, I didn’t really anticipate the conversation would continue on for a further 13 months. It did though, and despite the multiple challenges faced during that time, this week my young daughter now has the option to wear long pants or shorts, just as her brothers have always been able to.

At a public NSW primary school, why was there (for some) a deep-seated reluctance in giving equal uniform options to our girls? To this day, I’m still not sure.

At one particularly memorable P&C meeting, after I had addressed the issue once more, I was met with a barrage of comments including, “it’s always been like this”, “we like the smart look of the girls in the dresses”, “girls can play the same as the boys, it makes no difference to their play”, “just wear shorts underneath,” and “it’s a tradition that the girls love”. All commentary I find baffling.  However, when it’s given to you all at once, accompanied with sneers and loud open hostility, it’s also incredibly intimidating.

I left that meeting in a flood of tears. While I had managed to hold it together during the barrage of unsupportive comments, once out in the open air I sobbed. After six months of seemingly useless communication, followed by that scene, I was left almost giving up.

Over the next few months however, the media articles kept coming. This was an issue that was affecting a huge amount of school-aged girls, a nationwide topic that wasn’t going away until something changed.  An issue that also continued here, at our local school.

So I changed tack. After nearly nine months of being the sole voice in initiating change, and seemingly perpetually swimming in a pool of convoluted stalling tactics, I cast my net wider and asked for help. I needed a strategic team with me that I knew would have my back and could offer more insightful methods on how to enact a school wide change of policy. It was not going to be enough for single children to be “allowed” to wear pants or shorts as was being offered; I wanted all girls to have this choice.

I asked for help from a handful of other parents willing to stand up and instantly got it. Through this small dedicated group the ground swell grew. There were multiple others who felt just as strongly that this option for girls to have was a right, and anything less than that was discriminatory.

Nearly a year in, and it had now become a conversation that couldn’t, and wouldn’t go away. 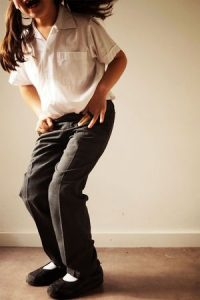 Brydie’s daughter in her school pants.

The school community was finally consulted, to see what support there was. While there was still a very small amount of people strongly opposed, some had changed their minds once given the facts, and others, which I saw as the majority, were in loud supportive favour.

The problem with this ratio was that the ones that could easily implement any changes were the ones stalling it.

Which is where persistence comes in. Persistence in turning up to the meetings that were hard to get to. Being able to continue the conversation until you can recite it on loop, letting any opposition know that you and your supporters are in this for the long haul, (and also not taking on board the continuous intimidation and stalling tactics that might be done.)

Also remembering you’ve always got something to give, no matter how small that voice seems at times, it’s yours to be used. Whether it’s in a letter, standing up, creatively fuelled, or simply raising a question in a noisy room where the conversation has never been challenged before.

Because of that refusal to be silenced, this term, girls are finally given the option to wear grey shorts and grey pants, just as the boys can. At this stage, they are not items of clothing that are stocked by our uniform supplier, unless the girls are willing to wear the boys’ uniform. If the girls wish to wear girls’ shorts and pants they have to source them themselves. (A skort option will also be added to the uniform list.)

The first day with new options, my girl was a bit nervous. Would she be the only one? Being a bigger school I’m not sure just how many there were. I saw an older girl in shorts and wanted to run up and hug her. I didn’t, but I did high five my daughter. There was another girl in kindergarten that was also wearing long grey pants. At morning line up, the teachers got the two girls to stand, explained the uniform change a little, and then cheered and applauded them both. They sat down feeling like superstars.

That support was like a long exhale for me, and I’m incredibly grateful to the kinder teachers for doing this.

Sourcing local grey girls’ shorts and pants at this stage isn’t particularly easy, and I would imagine that alone would stop a lot of people from purchasing anything different from what the school offers. I am hopeful though, that this uniform change will be built upon.

While the long detailed story of how the girls at our school got to be able to choose is something our greater school community will probably never be aware of, there are a handful of us that know how it played out in tedious intimate detail.

Shorts and pants for girls could have been added to the uniform list 13 months ago. No changes were ever made, purely additions.

An addition of choice, and that is always worth fighting for.