Have we progressed since the sixties?

As a young girl in the sixties I was aware that I was treated very differently to the boys.

I was labelled a tomboy because of my passion for sport. I was humiliated on the monkey bars as most girls were made to wear dresses and our underwear was on show for all to see. Girls were teased about this and the boys were actually more able due to the fact that they could wear shorts or pants. Imagine trying to perform complex gymnastics whilst trying to hold your dress down?

Boys also made sport of the fact that they could lift our dresses to embarrass us. I was delighted when a new trend began, they were called “witches britches” and were like shorts, but made out of an elastic material with frills, of course. We wore them underneath our dresses and certainly caught up to and overtook the boys on the monkey bars once we had the freedom provided by those britches. 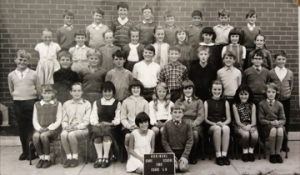 Winter was another thing altogether. We had to endure the grey tunic. They were cold, heavy and itchy. I wore pants whenever I could and was once again labelled a tomboy.

The tyranny of high school

Imagine my dismay when I got to high school and was informed that regardless of weather conditions, girls wore summer dresses and winter tunics. We were advised that we were lucky to wear tights instead of stockings, however we still froze. Once again, boys had the freedom and we were confined to dresses. PE was my favourite subject, however it was almost impossible to perform some of the activities whilst wearing sports tunics.

As a junior member of the school I joined a group of older girls who also felt the same way. There were a lot of strikes in the seventies so we decided that was our only option. Our senior teacher was a Miss who wore slacks and because of this, her sexuality was questioned. Some student’s comments about here were vile and I was disgusted. Luckily for us she attended the strike and agreed to put forward our motion to wear slacks, but the compromise was that we had to stop wearing fluorescent underwear and not hitch up our uniforms to make the hemline shorter.

I was happy with this, however wasn’t satisfied with the sports uniform.  Once again we took our case to the Sports mistress and it took time, but I can proudly say that we were one of the first schools to wear singlets and bloomers instead of tunics. Having said that, we still felt like we were wearing underwear but eventually got used to it. Some parents and teachers were unhappy with the changes as they felt that it wasn’t feminine and would also affect us adversely when we were menstruating! 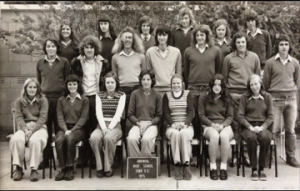 Janet – second on the left in front row.

As a parent I made sure my children regardless of sex wore the appropriate clothes to match weather conditions, just like adults do. My children’s primary school uniform was a combination of dresses, skirts, skorts and pants for the girls, so I was very happy with this.

When my children went to high school however, they were faced with the same rigid set of rules for both boys and girls.

Interestingly, boys would not wear shorts at all and wore slacks all year round regardless of the weather conditions. I raised this with the school and was told that I was incorrect.  By the time my son attended, the shorts we were made to purchase were never worn as the boys would be teased and labelled gay. I tried everything to get my son to wear them but he refused until senior school where he wore his shorts all year round!

The uniform changed for the girls and tunics were almost at ground level (so long). Sports uniforms were unisex much to my delight.

There is no valid reason to make any school student wear a uniform that does not suit weather conditions. School is the only place that I can think of that police this idiocy. If all adults in a children’s circle dress to weather conditions, then why can’t their children? This is not the sixties, times have changed and I simply cannot accept the fact that after all our good work in the seventies, students are being disadvantaged once again.

Why aren’t we there yet?

It is not rocket science. If you force a girl to wear a dress you will affect her ability to participate in a range of activities. The obesity epidemic is forced down our throats daily. Domestic violence, coward punches, sexual crime and the list goes on. If male students are able to lift a dress at school, how does the female student protect herself? Why should she be put in this position in the first place? If schools are a microcosm of society, where does this sort of behaviour end? It is a form of bullying. If a female student isn’t able to wear clothes that suit the weather conditions, clothes that protect her modesty and clothes that promote activity, what happens to her choices?