It really does take many, many people to create effective social change. Here at Girls’ Uniform Agenda (GUA), we have two co-founders who work tirelessly to strategise and coordinate the efforts of 10 state representatives. Those 10 state reps work tirelessly to drive change in their areas, and support families who are working toward change in their school. Those families are standing up in P&C meetings and principal’s offices asking that their daughter’s rights be respected, and engaging in letter writing to local MPs and Education Ministers. When we all pull together, we can make necessary social change.

Where did the Girls’ Uniform Agenda journey begin?

Dr Amanda Mergler and Simone Cariss formed Girls’ Uniform Agenda (GUA) in February 2017. Amanda is a Queensland psychologist who was shocked to discover that her 6 year old daughter would be expected to wear a dress to her public school year round. Simone was miles away in Victoria, asking her Catholic school principal to add pants for girls to the uniform list as her daughter was finding she couldn’t run and play freely in her winter tunic. Both women were met with refusal from their schools to allow girls to wear shorts and pants, and both independently decided that accepting such an outdated and sexist rule was not an option. 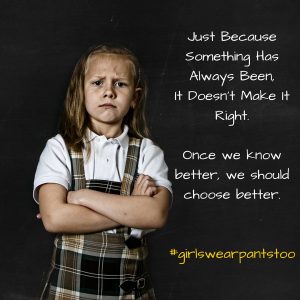 Amanda says, “I said to the school, ‘this is not okay. She just wants to wear the shorts like her brother does, and I want her to be warm in the winter pants, like her brother is.’” When Amanda’s school leadership team dug in their heels and refused to allow shorts and pants for girls, she wrote to the Education Department and published an article on The Conversation website asking why we still force girls to wear skirts and dresses to school.

In a similar move, Simone had created a Change.org petition calling for legislative change to mandate choice of shorts and pants for all girls in all schools. “My daughter went from being a carefree kid who could run around to being restricted by her clothing because of her gender. That just made me really mad. I thought, ‘If my daughter is experiencing this, it’s happening to a lot of other girls. Perhaps there are other people who really don’t feel confident to speak up, so I’ll speak up for them.’”

Amanda’s article for The Conversation linked to Simone’s petition, and the two then contacted each other and shared their stories. Very quickly they realised that if they worked together, they’d be far more powerful and likely to create change than if they worked alone. “We connected and hit it off straightway,” Cariss remembers. “Within a couple of weeks we were talking about how we could tackle this across the country.” Both women knew that to create change, they had to take on the system, and not just the individual schools involved.

Together they formed Girls’ Uniform Agenda, then contacted other parents who had been fighting for change and asked them to join a national committee. From there, they launched a co-ordinated campaign. “We wrote lots of letters and articles and did lots of media engagements. We pressured in all the right places,” Amanda says.

Since then, Girls’ Uniform Agenda has grown to a nation-wide group that consists of 10 executive members. Each member volunteers their time and works hard to drive this change in their state. They do this because they believe in the rights of girls and they will not allow their daughter, or anyone else’s, to be forced to wear a dress or skirt to school. 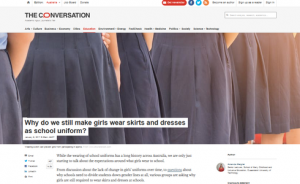 So Where Are We Now?

Since they formed in February 2017, GUA have successfully achieved Education Department policy change in Western Australia, Victoria, Queensland, and New South Wales.  These changes mean that these state education departments have mandated that all state schools must offer girls shorts and pants as part of their everyday school uniform.

While South Australia and the Australian Capital Territory have not updated their policy since GUA started, both states have good student dress codes that are effectively offering choice for girls in state schools. Data collection examining uniform policies in this state and territory indicate that most public schools offer shorts and pants for girls.

Similarly, while the Northern Territory has not done a recent state uniform policy update, preliminary data collection on public schools in this territory show that girls usually have choice of shorts and pants. A state of concern however is Tasmania, where no clear state dress code is apparent. Preliminary data collection in this state shows that too many girls in public schools are not afforded the choice of shorts and pants. GUA will continue to target this state and work with the Education Department to mandate shorts and pants for girls as part of their every day school uniform. 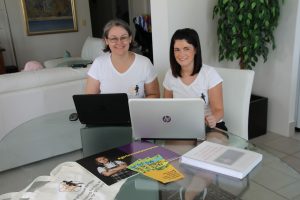 While GUA will continue to fight for change in public schools in Tasmania, and monitor the implementation of changes across all states, they are also directing their efforts toward creating change in private schools. Private schools aren’t required to follow Education Department policies and guidelines, however they are required to uphold anti-discrimination legislation. GUA is working with the anti-discrimination commissions in many states to determine ways to create systemic change across these sectors and give thousands more girls the choice of pants and shorts at school. As Simone and Amanda have felt from the beginning, powerful institutions like schools and education systems need to take ownership of this issue and refuse to continue discriminating against girls.

Amanda and Simone are two women who realised that many, many girls were still facing uniform discrimination in schools, and that they could not stand by and allow this to continue. By reaching out to parents across the country, they gathered stories from women who had stood up and asked for the right to wear shorts and pants to school over many decades. This issue is not a new one, but it is one that many schools have refused to acknowledge. It was not until women came together in numbers across the country and spoke loudly and continually in public forums, that systemic change via public policy occurred. Women are powerful, and never more so than when we stand together.