Like most things worth fighting for, the school uniform issue has been around for a long time.

Every teenager has their personal drama, a focal point for the self-consciousness and anxiety that comes with negotiating the transition from child to adult. In my case, I grew early and fast. I was fully grown at 13, with a double D bust and a height well in excess of many of the teachers, let alone my peers. In the scheme of things, this wasn’t a major tragedy, but it did mean that I took clothing choices fairly seriously. Being someone who would prefer to be listened to than looked at, I experimented with the limits of my public high school uniform, always aiming for a severe ‘my eyes are actually up here’ style which would minimise unwanted attention. 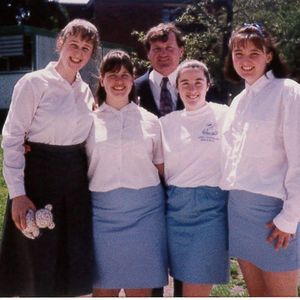 As you can see, I’m still clinging to the winter uniform while my friends have shifted to the shorter summer skirt. (I’m also inexplicably holding a teddy bear. This wasn’t a feature of the look). I was really proud of that skirt because it was my own work. A weekend at the sewing machine with technical support from Mum had produced a loose A-line with a huge box pleat at the front. It was a skirt for running in. Or for destroying my rivals on the handball court without fear of exposure. If Daleks suddenly turned up I could move as fast as the next geek. I was ready for anything. It was not sexy, but I was frankly not interested in sexy. Sexy was for weekends. I wanted to move and think and get on with stuff. The skirt was not regulation – it was too long and the wrong shape, but it was still a skirt in the right colour and it looked good with my debating blazer, so I got away with it.

The summer uniform for seniors was a different matter. The light blue skirt was straight, tight and, to my mind, impractical. There was no way I was putting it on. The boys would walk all over me if I hand to play handball in that skirt. Something had to be done.

The solution was simple. Shorts. Just like the boys wore, but the same colour as the girl’s skirts. In a line up I would blend in, but I could still move freely. Problem sorted. I didn’t talk to anyone about it, I just rocked up in my pseudo uniform and got on with things. So it was a shock when I got my first ever detention slip (I know, I know) one Summer day for being out of uniform. Shorts were not uniform. Shorts were ‘too casual’ for girls, despite the fact they were the required uniform for boys. I was stunned. It was my first experience of rules without reason. And my first inkling that even gentle pushing at the boundaries of your gender could be treated as a serious infraction.

So I pulled out the nuclear gambit. I threatened to call my lawyer. In this case, my lawyer was my very cool Mum, a local feminist solicitor with a reputation for talking reasonably to people until they gave in or ran away.  To my amazement, instead of laughing in my face the teacher in question put out her hand, took back the detention slip and walked away. A year later, the uniform policy was changed to include shorts and pants for girls following representations from the Student Council (to which my more politically savvy younger sister had been elected).

So, a storm in a tea cup. Except that the moment the teacher walked away from me, I learned two essential things. Firstly, if you can articulate a problem and you are bold and sufficiently self-assured, sometimes authority will blink. If you can ignore the pressing emotional need to conform, there is more room for you than you realise. And secondly, that this was true for me, because of who I was. I am a white, well-educated woman with no disability from a professional family. When challenged I could call on people who would back me. I had power. Two years later, when I went to Uni, I started meeting women who didn’t have the same power as me. Who were subjected to stricter rules, given harsher punishments for pushing boundaries, usually in subtle ways that were hard to identify. I also met people who were genuinely frightened of difference. People who were disoriented by a world in which the simple social rules they had grown up with fell apart in the face of messy human variety.

I don’t mind uniforms per se, but it’s possible to achieve a sense of togetherness and institutional belonging whilst still recognising that any school is made up of a wide variety of individuals. Uniform colours in a range of agreed styles is a sensible response to the reality of individuality.