The pink tax on school uniforms

Have you heard about the “pink tax?” For a number of years now, various groups have been drawing attention to the fact that there’s inequality in what people pay for gender specific products. This hidden tax often makes the “female” version of popular products more expensive than the “male” version.

Get Up began raising awareness about the pink tax back in 2015, when they invited people to submit photos of everyday items where identical or extremely similar products were more expensive for women than for men. You can see some of these photos here but be warned, it’s likely to make you so angry that you might refuse to shop ever again!

A good example are Bic ‘For Her’ Razors, at $4.50 for two, and Bic Razors, at $4 for two. We know of course, that razors don’t have a gender, and that all humans could buy the Bic Razors at $4 for two. It is interesting to consider why we need to create gender alternatives for products (the “female tissues” and the “male tissues”) at all? Due to the fact that the “female” version often costs more for essentially the same thing, we must accept that one key reason to attribute a gender to a product is so companies make more money out of women.

An analysis I have not yet seen done, and what I set out to do here, is explore the pink tax on school uniforms. We at Girls’ Uniform agenda have explored uniform policies of many schools across the country. We know that in the majority of secondary schools, gender restrictions in clothing apply, with boys expected to wear shorts, trousers and ties, and girls expected to wear dresses, tunics and tights. We wondered if we would find the pink tax operating within these gender norms.

We did find evidence of the pink tax as described above, where what was essentially the same product was more expensive for girls than boys. The following shirts are a good example of this. 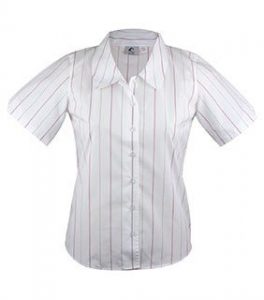 What we also found, is that girls end up paying significantly more for their school uniforms not simply because the ‘girls’ version of a shirt or pair of pants costs more, but because of the different clothing girls and boys and forced into. As the majority of secondary schools require girls to wear dresses and skirts, and boys to wear shorts and trousers, this results in girls paying more for their school uniforms than boys do. Typically, shorts and trousers cost less than skirts and dresses, and girls often have extra expenses, such as tights to keep warm, that boys in trousers do not have.

Here is a comparison of uniform choices from three secondary schools around Australia:

As can be seen in the table above, the parents of girls at these schools will spend more to dress them in their full school uniform than will the parents of boys. It would seem that the social normalisation of girls’ clothing being more expensive than boys’ clothing is entrenched in many schools, even though this is considered discriminatory by policy makers in Departments of Education across the country.

This is an inequity that schools perpetuate by purchasing from stockists that have such price differentials in their clothing options, and by continuing to require that girls and boys must wear traditional gender-based attire. If schools would move into the 21st century and provide genuine unisex options for students, or ensure that ‘girls’ uniform options, and ‘boys’ uniform options are similarly priced, we would see this discriminatory “pink tax” disappear.