Girls To Wear The Pants At Elite Melbourne Girls School

It should come as no surprise that we at Girls’ Uniform Agenda love to see girls being active. It is one of the key reasons why we push so hard for girls to have practical uniforms at school. All schools, including the ‘elite’ ones.

It was a delight to walk through the gates of a prestigious all-girls school in Melbourne’s inner north west and see a group of girls in their sports uniforms kicking the football on the grass at lunch time. They were having a blast.

Then I looked over to the dress wearing girls sitting under a tree chatting. A much larger group of girls sitting there being inactive. Sigh. How many would join in if they weren’t wearing a dress?

Thankfully for this school we will find out very soon.

Lowther Hall Anglican Grammar school, steeped in almost 100 years of tradition, embarked on the journey to give their school uniform a major overhaul two years ago. I am told girls at Lowther are always encouraged to have a voice and the girls had input in a major way.

Alongside the Heads of School, the Parents and Friends’ President and Old Grammarians, students in Years 6 to 12 were given the opportunity to be key advisors in developing a new uniform that reflected the needs of the girls. Not parents. The girls that have to put the uniform on every day.

Students will now be offered a suite of choices that they can select from, depending on their preferences, their body temperature, the weather, what they have on that day or even in fitting with their gender identity. All intentionally designed for the girls to have options, whilst also providing a sense of belonging and uniformity. 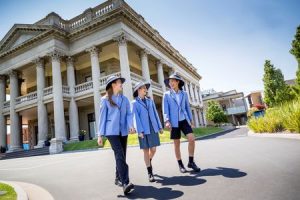 Elisabeth Rhodes, Lowther Hall Principal, admitted that girls’ uniforms in general, had really not kept pace with modern society. The role of women, particularly in the workplace, has changed over time and “our uniform needed to better reflect that”, she said. “We want our girls to be confident about entering the world and now we have options that reflect choices that we, as women, have in society”.

Elisabeth was quick to mention the evidence that stacks up to support the school’s decision to offer girls choice. “We know from the research that girls are more active when wearing shorts and pants. We also know that being active is linked to wellbeing and positive mental health. That is really important to us.”

Research also points to strong links between physical activity and academic results. “Anecdotally we see that. Our best performing students aren’t always those with their head in a book in the library at lunchtime. They are outside being active and involved in our sports programs,” Ms Rhodes added.

In what is arguably a masterstroke, the Kindergarten, Prep and Year 1 girls will only have the choice of pants and shorts under the new uniform guidelines. Ms Rhodes emphasised that “we really want to steer our youngest learners towards being active. Then from Year 2 they can choose the dress or skirt if they wish”.

One of the problems we see at Girls’ Uniform Agenda is that many girls ‘choose’ not to wear the pants or shorts for fear of standing out. The ones that do, tend to be ‘lone uniform warriors’, and that can prove difficult for some girls. By normalising the pants and shorts at Lowther Hall for junior school members the culture of acceptance of these items will become embedded in the school community. Along with all the benefits that go with it. This should lead to girls feeling as though they have a ‘real’ ability to choose.

At the launch on the 29th of November 2017, a ticketed invite only event, students and parents alike waited in eager anticipation for the first look at the new uniform. The launch included a parade of the options, followed by a panel discussion with designer Jonathan Ward and other school leaders, and ended with a 5 minute short film displaying the history and now modern functionality of the new uniform. In this way the school gave a respectful nod to tradition, and provided a powerful demonstration of the need to move on.

That is one way to get buy in. Student-led decisions about what they should wear. A leadership team that listens to them. A school community that will (hopefully) embrace change and progress. It is clearly time and this school is ready.

We can see the tide is turning on sexist school uniforms but there is still a long way to go, particularly amongst the independent and catholic schools. Our research points to only 18% of those schools in Victoria offering choice for girls. There seems to be even bigger resistance to change for single sex girls’ schools.

Of the 30 independent and catholic girls’ schools sampled in Melbourne, only one offered both the choice of pants AND shorts for their girls. ONE. Let that sink in.

That ONE was Lowther Hall. If this school, steeped in almost 100 years of tradition can do it, there really are no excuses. 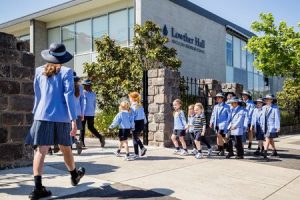