American girls wear shorts and pants at school. How much longer for Australian school girls? 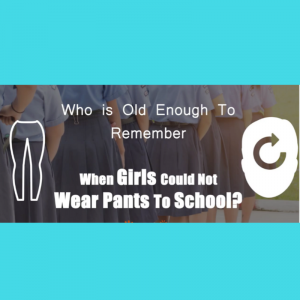 “Who is old enough to remember…when girls could not wear pants to school?”

The question on this Facebook post frustrated me; we know that anyone alive today in Australia is old enough to remember this, it still happens.

After digging a little deeper, I realised the post had originated in America, and the majority of the comments underneath were from Americans. While America still has a small number of schools that do enforce uniform, most American schools do not. They do have a dress code, and it seems that a few decades ago American dress codes expressly prohibited pants for girls.

What was interesting to me was the overarching reason why dress codes once denied American school girls shorts and pants. Can you take a guess what it was?  The exact same reason we find ourselves at Girls’ Uniform Agenda fighting against today. Comments from Americans under the post highlighted it.

We were taught how to be ladies. How to look feminine – Betty

Clothes don’t have a gender

Some in Australian society in 2018, including many school administrators, still cling to antiquated ideas about “what makes a woman”. Surely, most of us now realise that whether women wear a skirt or pants does not determine their gender. Like most women, I choose my own clothes. I personally wear pants 90% of the time, and it’s never lead to gender confusion or questions about my femininity. There shouldn’t be a requirement for women or girls to wear clothing that they are not comfortable wearing, and no girl should be told that she will only get respect if she dresses a certain way.

Some Australian schools tell us that no female student, or her parent, has ever raised the issue of wanting to wear shorts and pants. It’s hard to believe, when in America, women fought for this right many, many decades ago (they fought for this in Australia too. Schools are lying!) Can you imagine why some American girls wanted to wear shorts and pants? The exact same reasons girls in Australia give today. As the comments below show, these include the cold, preference for pants and shorts, wanting to be physically active and the injustice of not being as warm and comfortable as boys.

The cold and the unfair

Tried wearing pants in winter when I had to walk a mile in 2 feet of snow to catch the school bus. Was not allowed to attend classes until I changed into a skirt or dress – Bernice

I remember my sweet mother fighting the school board so we could wear pants in the winter… she won, but we had to wear them UNDER our dresses!! – Betty

I lived in Montana, and the winters (plus the Snow) got pretty harsh, and I can remember how my Mother would rub my extremely red legs to get them warm again. All we had to protect our legs was long cotton stockings. I was in high school before we were allowed to wear pants to school, and then take them off before classes started. Very unfair – Jean

I remember freezing during recess or walking to and from school and thinking how unfair it was that the boys were able to wear pants. I got smart and started wearing pants under my dress. In junior high on my way to school my friend met me wearing jeans. She told me the dress code no longer existed. I ran all the way home and changed into my jeans. So yes, I did cry about it. Sometimes I think we forget the things we didn’t like yet were forced to do – Marie

I graduated high school in ’69. My senior year the VP was arguing with some gals in the hall who wanted to wear pants, saying he thought that they just wanted to be like the boys. I couldn’t believe that, and said to him “You must be joking! Put on a skirt and walk these halls in winter. And you wonder why we are out sick a lot?” A week later all the girls could wear pants. It was an interesting time –  Carolyn

Yep spent more time outside principles office for wearing pants then I did in class. My dad was determined I could wear pants if I wanted to, no wonder I was a rebel. My dad was the best. Early 50s. – Phyllis

I hated having to wear dresses and still do. I was a tomboy growing up.  Still am to this day, love to play in the dirt – Barbara

It seems that these days, in the 21st Century, American schools have accepted that you cannot tell girls they cannot wear shorts and pants.  For many Australian school girls however, this basic right is still being denied them, and they are still spending time in the principal’s office and getting detention for daring to wear shorts or pants.  Our school girls are learning that their comfort and what they want does not matter, and that it is better to stay silent. Just like Carol did, all those years ago, in America.

I wore pants under my dress once to school during a snow storm. The teacher made me remove them in front of the class and would not let me wear them home. Never wore pants again

Why do schools act like this issue is new to them, when we know that many, many girls and women across the world have been asking for the choice of shorts and pants for decades? All girls want a choice in what they wear to school. Let’s all make 2018 the year of uniform equality for girls by standing up and speaking out. We need to support school girls to know that they can ask for what they want, and that they deserve to be heard, comfortable and warm.