Power In The Collective: Girls Speaking Up

Last year I wrote a piece about boys in the UK controversially wearing skirts to school in defiance of a strict dress code. It was hot and they were told they could not wear shorts, only long pants. So, collectively, they took a stand and all wore skirts to school. They made international news.

Back then, I commented that rarely do we see girls standing together in solidarity in the same way. Particularly in the school yard when it comes to uniforms. Girls want to do everything in their power to fit in and fly under the radar.  The term “lone uniform warrior” was coined to reflect that.

As Victorian representative and co-founder of Girls Uniform Agenda, it is common for me to talk to and give advice to families and school girls seeking to introduce pants and shorts at their schools. It is rare that I meet a group of girls who are willing to tackle the issue together.

A group of five girls at a Victorian public high school reached out to me earlier this year. Public schools are now required to offer girls pants and shorts as part of everyday school uniform options. But, many schools are simply removing labels from the boys clothing and saying to the girls, “There you go, you’ve got choice now.”  These school girls didn’t think that was good enough. And fair enough!

After initially being told ‘no’ to their request for girl-cut pants, they reached out to Girls Uniform Agenda, took on board advice and launched a campaign to get real choice for girls introduced at their school. I’ll let you read it about it in their words: 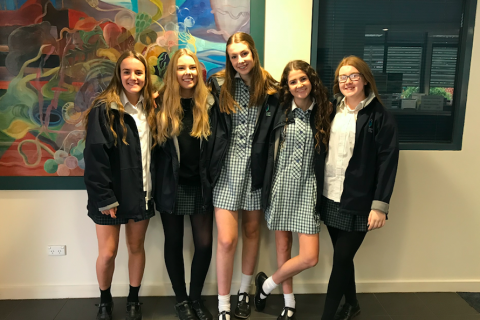 The Five Girls from Victoria

Our names are Willow, Elise, Jordan, Jemma and Sophie. We stand for equality in all aspects, school uniforms included. Our group includes five girls attending year 10 at a public school. We as one, care about girls school uniforms because we think it’s frankly unfair and indecent, not to mention old-fashioned, to not offer girls and boys equivalent uniform options, that actually fit them.

As part of a year 10 subject, we took on a project to get girls pants introduced into the school uniform. Our school currently offers a unisex uniform policy, meaning they supply girls dresses and skirts, and boys shorts, shirts and pants, but any student of the school is allowed to wear any piece of the uniform, no matter what sex it’s designed for. The only problem we have with this, is the fact that the pants we’re offered don’t fit us, or the majority of other girls at our school.

This project started in May 2017 when two of us decided to write a persuasive letter to the head of our school. Along with the letter we handed in a petition with over 250 signatures supporting our project. This led to us being invited to a school council meeting which resulted in no success, so, almost a year later we decided to try again, this time with three of our friends involved.

Not giving up the fight for choice

We started by contacting Girls Uniform Agenda. Simone, from this website, kept in contact with us throughout the whole process, giving us advice, guidance and motivation. We got a sample of female pants sent to our school from a supplier for us to try. They fit a lot better than the option we were currently offered and using the pants, we made a video. This video included us asking some boys at our school if they would wear these girls pants to school everyday. Just about all of them said no.

It gave the message that boys would never wear pants made to fit our bodies. So why do we have no other choice than to wear pants made to fit theirs? We used this video in a presentation to our principal and vice principal which has led us to where we are now. The presentation went well, leaving us with plans to get girls pants introduced into the uniform in the near future. Our next step we are taking is attending a school council uniform committee meeting. We are very proud and pleased with the outcome and can’t wait for girls pants!

As the girls clearly demonstrated with their video, schools don’t expect boys to wear girl-cut pants and shorts. So, why do they think it’s ok to offer boy-cut clothing to girls? Oh that’s right, some schools still actually prefer girls to look pretty and ‘proper’ in a dress.  So, they claim to be offering a choice, but really they don’t want to.  So, they give an option that no girl will wear.  This is all too familiar for many school girls.  I would hate to be amongst the last schools holding on to outdated notions of what it means to be a girl in 2018.

Power in the collective

Girls are finding their voices and don’t want to be sitting on the sidelines any longer (in a dress or otherwise).  There is power in their collective voice.  They are not giving up when schools refuse to provide the option of girls pants and shorts.  They want choice and schools would be best placed to make sure they are listening.

Please contact Girls’ Uniform Agenda if you need help getting getting pants and shorts for girls at your school: enquiries@girlsuniformagenda.org