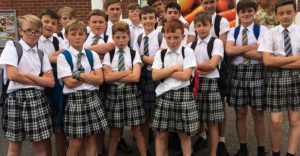 It was with a wry smile that I read about the boys in the UK who defied their school uniform policies by wearing skirts to school during the recent heat wave. And a sigh of exasperation when girls who took their tights off to cool down in the heat were removed from classrooms and swiftly told to put them back on.

The teenage boys were told they could not wear shorts and must wear long trousers, despite the heat. In an apparent moment of sarcasm some male students were told they could wear the skirt, but shorts were not an option. So they did. The skirt is also part of the uniform, albeit for the girls, breezy and cool admittedly and so they came to school in the uniform that they felt most comfortable in given the circumstances. The skirt was the best option available in the heat. In the absence of shorts, I’d have to agree.

Good on them, I say. When the uniform is not fit for purpose I think students’ voices should be heard and listened to. Why should students have to ‘suck it up’ when there is clearly a suitable alternative? Shorts. For both genders. Pants too, not just for the boys, in winter.

The thing that got me though was why, in the face of injustice, the boys felt totally comfortable joining forces to make their case. Standing in solidarity together. Wearing skirts certainly makes a statement. And in all likelihood makes people, especially school leaders, uncomfortable. Those boys, and many others, will get their shorts. There’s no doubt about that.

Meanwhile in 2017 girls are still fighting for the right to wear pants and shorts to school. Women and girls have been fighting this battle one by one for decades.

The thing I don’t understand is why most girls seem to lack the same confidence and conviction to stand up collectively like those boys have, when it comes to the forced wearing of dresses at school. In the same way that the boys were sweltering in the heat, girls often freeze through the winter in skirts and dresses. Stockings simply do not provide the same warmth as pants. Not to mention what girls are unable to do in dresses at any time of year. Like run, kick a ball, ride a bike to school, hang from the monkey bars without flashing. I could go on.

Why don’t girls make a stand?

Sexism is not okay

The reasons for girls not speaking out are complex and multi-faceted and I don’t claim to be an expert on the matter. But I am a woman who has spoken out on the very issue of school uniforms for girls. I know what the backlash feels like and the rigid conservatism that gets thrust your way if you dare to imply that girls ought to wear anything other than a prim and proper dress or skirt.

Pressures from society that endorse the idea that girls ought to be pretty before smart, and dressed so as to be aesthetically pleasing to the eye rather than functional stop girls speaking up. This is particularly true when the issue to speak up about concerns matters that relate to their appearance, such as uniforms.

Another likely factor is that girls (and women) have a tendency to tear each other down, rather than build each other up. Not always. But commonly. Arguably even more so in the schoolyard. We see each other as competitors rather than combatants. Staying silent for fear of being bullied or ostracised is a small price to pay.

Going back to the boys in the UK, I can see the scenario being played out now in the school yard. One boy says to his mates “I’m not putting up with this, it’s so hot. What if we wear the girls skirt to school tomorrow and we’ll make a stand to get shorts for the uniform. Are you in?” “Sure, I’ll get Bobby and Sam on board too, they’ll be up for it. Others will follow too. Let’s do it”.

Amongst the girls in a slightly different scenario. “It’s so cold in this dress, don’t you wish we could wear pants to school?” “Yeah sure but you wouldn’t want to be the only one. You’d get picked on. You would probably get told no anyway so why bother. I know Betty and Tracey like dresses so you wouldn’t want to get them offside”.

Or any other number of scenarios could be played out. You get my drift.

I’m glad the boys in the UK have been listened to. I’m glad they had the conviction to stand up to what they perceived to be an injustice. They have a legitimate argument to support the choice of shorts in summer. The primary purpose of school is to foster an environment that is conducive to learning. Sweltering in the heat in long pants in summer does not facilitate that. Shorts are a smart and sensible option. There isn’t a smart and sensible counter argument to it.

Likewise, girls have a legitimate argument against the forced wearing of dresses and they should be listened to rather than dismissed. I only wish girls would have the same gumption to stand up collectively with and beside their peers to fight for choice. Usually I hear from lone warrior girls (and their parents) who’ve taken it upon themselves to fight for change, usually (but not always) without much other support. There isn’t a legitimate counter argument as to why girls shouldn’t have the choice of pants and shorts at school all year round. Only an ideological one.

When girls and women stand up as individuals, it seems that schools find us easier to ignore. When we come together as a collective however, we are much harder to silence. Girls’ Uniform Agenda is a national group fighting for the rights of girls to have the option of shorts and pants as part of their everyday school uniform.

We know that when those of you out there, who agree that girls should be offered shorts and pants as part of their everyday school uniform, stand up and speak out alongside us, we will see real change. To get resources to help you with this, go to our website. Add your voice to more than 20,000 others by signing our petition, and stay in the loop with developments by liking our Facebook page. To contact us to find out what else you can do to help, email us at enquiries@girlsuniformagenda.org.

Let’s get this done, so that we don’t see many more decades of girls being told that they are not worth listening to. And many more winters of girls freezing in their dresses and skirts.