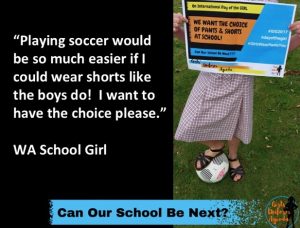 Active for longer than sports lessons

The school day is long and Health & Physical Education (HPE) lessons relatively short.  We need to encourage children to be active during break times to hit their daily exercise target.  Girls do less exercise than boys, and that holds true in the playground.  Girls do significantly less physical activity when wearing formal school uniform (a dress), than when wearing sports uniform (shorts).  And sports uniforms where shorts or pants are allowed, in some schools, are worn for one lesson, once-a-week.

Two recent Australian studies show 10 to 13 year old girls found their uniform significantly restricted their ability to play at lunchtime.  If girls wore active-friendly clothing it would encourage them to be more physically active.

Have you tried kicking a footy in a dress?

“I wasn’t allowed to wear shorts or pants during the Summer months at my high school, and it had a big impact on what I could and couldn’t do physically day to day. Looking back on those years now I feel a little annoyed and even a little sad, because I remember so many times not joining in with my friends who were having a kick of the footy, because I was wearing a dress.

Not allowing girls and young women to wear shorts or pants at school…hugely limits the amount of sport and physical activity they are able to do during their school day.”

Emma Kearney, Australian Football Women’s League and Women’s Big Bash League player, knows from personal experience and from being a Physical Education Teacher, how limiting skirts and dresses can be for girls:

“As a PE teacher I have seen firsthand the damage forcing girls to wear school dresses has on the individual. They are completely restrictive, which discourages girls from being active...

Girls are already placed in a stereotype where it is seen to be ‘non-feminine’ to be active and play sports. They certainly don’t need the further push they are getting by being forced to put on their school dress each morning…

When I was in primary school it was such a pain playing both footy and cricket in the dress. I was always so excited when we had PE, because I could wear my PE uniform for the whole day. In the PE uniform I wasn’t restricted when I played.”

Exercise is really important for teenage girls, particularly for increasing their self-esteem and positive body image.  It helps to reduce their stress, levels of anxiety and depression, as well as prevent future illness.  Keeping girls physically active, especially as they transition through adolescence, can help maintain their physical, psychological and emotional health.  Importantly, it contributes to their overall happiness.

To turn that D-grade into an A-grade and for girls to benefit from the positives of exercising regularly, we need to ditch dresses and skirts.  At the very least, we need pants and shorts to be an option available to all girls, in all schools.  We need parents to consider how limiting dresses are when buying their children’s school uniforms, or sitting on school P&C committees.  We need to think seriously about whether dresses and skirts are the best choice. Girls are not running around and getting their 60 minutes of daily exercise, in part because their uniform makes it too difficult to be active.

We can’t have something as simple as wearing a skirt or dress be a barrier to physical activity and to safeguarding the health and well-being of our school girls.  Let’s try harder, let’s make keeping girls active a priority: bring on shorts and pants for girls, our A-grade and the gold medals!