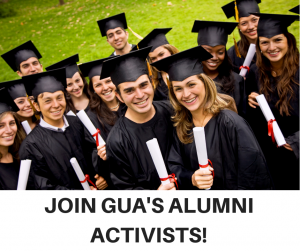 We hear school alumni can strongly resist uniform change; preferring the skirt and dress-wearing traditions ‘of their day’.  Peter however, shows how the school alumni can be a powerful force for change.  Having battled his daughter’s school in the ACT for girls to be able to wear pants, Peter turned his attention to a different state altogether, to his former school.  Seeing that his old school didn’t offer pants and shorts for girls, he asked when they would be updating and modernising their uniform policy.  Peter is adding support to a campaign that middle school students are already running.  These schoolgirls are pushing for their voices to be heard and for the right to wear pants and shorts every day.

“You don’t have to be a parent to advocate, but as part of the community of the school you went to, I think you are entitled to call for change.” – Peter

As a parent (father of a 10-year old attending an all girls’ school in Canberra) I was pleased that the school finally agreed to add trousers to the uniform range (with shorts to come). It was great to see so many girls at school running around on a chilly Canberra winter morning in their warm trousers and not freezing in their tunics. It took a lot of persuasion and navigating of a mysterious, never-heard-of-before uniform committee for the outcome. But it was worth it to see the results – proud and confident girls and young women.

I decided I did not want to stop with having achieved change in only my daughter’s school. I realised that I had a connection with my old school. The one that I had spent so much of my youth growing up at. Guess what? They still required girls to wear skirts. Nothing had changed in the 30 years since I had been there. So, I contacted the school, explained that I was an alumnus and wanted to speak with the headmaster to ask why they were still stuck in the past.

I used the resources on the Girls’ Uniform Agenda website to set out the arguments, but changed it slightly to reflect the fact that I was contacting them as an ex-student who was now a parent, and who expected something very different from the school I had attended many years ago.

We Can All Be Changemakers

The assistant to the headmaster contacted me and assured me that the issue was on their radar and plans were being developed. Very similar to what was said at my daughter’s school. So I replied again and will continue to reply until the shorts and trousers are part of the range and girls have a choice. I am also in contact with other ex-students and am encouraging them to raise the issue with the school. In fact, some are now parents of children at the school – so they have an added interest in getting this changed.

For me this demonstrates that, as campaigners for change, we shouldn’t limit ourselves to the schools our girls attend, or the ones in the local area. We should also contact those schools that we attended and demand to know what they are doing. Schools value their ex-students and will often see them as part of the broader school community. If that is the case, then we need to be heard on this important issue. Our support as ex-students would also support the current parents and students at the school who may be calling out for choice as well.

Example Email That You Can Send

Dear [Insert name of School Principal] and [Head of P&C]

Looking at your current uniform policy, I notice that the school still does not offer girls the choice of wearing pants and shorts as their everyday uniform.

Girls should be able to wear comfortable, practical and stylish uniform that encourages them to be physically active and confident.  Girls should be judged on their ability and not their appearance.  [co-ed schools:] [It’s a clear case of sex discrimination when girls are not afforded the same uniform options as the boys alongside them].  I would love to see [insert school] offer suitable uniform options for girls, following consultation with girls.

Give [insert school] girls a choice.  Be a leader for girls’ education.

I look forward to hearing what action you’ve already taken, and will take, to make sure girls have the choice of wearing pants and shorts every day.

Join Peter and the GUA Alumniati

Many voices asking for the same thing generates change.  Girls that want to wear pants and shorts as their everyday uniform often need support to be heard.  We love that Peter directly asked his old school why girls didn’t have choice, on behalf of all girls at the school.  Peter is holding a microphone for those girls at the school now, who are asking to be properly heard.  Girls’ Uniform Agenda LOVE that Peter will continue to ask and be persistent with his former school until they do offer choice.  Making a noise, and keeping on making a noise, will press schools to make changes that we know girls want and need.  Good on you Peter!

Get onto your former school, talk to other alumni – especially those that are parents of current students – and ask the question: why does your former school still not offer girls a choice? Join GUA’s Alumniati!  Tell us how you get on!