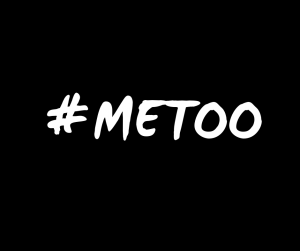 The #MeToo movement is about women raising their voices together, to demonstrate the sheer magnitude of women who have been sexually harassed or sexually assaulted. It is a rare moment in history where many women, who have been frightened into silence for so long, are shouting out about their treatment.

#MeToo has taught us that women will stay in situations where they are uncomfortable, and endure men violating their bodies, because they are terrified. It has also shown us that women are sometimes so disconnected from what they feel, and often too powerless to speak their truth, that they do nothing in situations where their human rights are violated.

In situations where women feel that things are not right, and sense that bad things might be about to happen to them, they sometimes do nothing, because the training they have received their whole life kicks in. Girls are taught from a very young age to not hurt anyone else’s feelings. In particular they are taught not to hurt the feelings of boys and men.

How we condition girls to ignore their discomfort

Forcing girls to wear skirts and dresses to school

One key way we are still doing this is in the forced requirement that girls wear skirts and dresses to schools. Many girls do not like wearing skirts and dresses, and have asked over many, many years to be allowed to wear shorts and pants to school. And they have been told no. They have been told to ignore their discomfort and keep dressing the way they are told to, because they look prettier in dresses, the principal likes it, and it’s traditional.

How long are we going to tell girls to ignore what they feel and do what they are told, even when doing what they are told leads to their distress? Why are we surprised, and often angry with young girls, when they ignore their own feelings and don’t stand up for themselves? The very schools they go to tell them to ignore their own needs in something as basic as what they wear. We educate them in institutions that tell them to put up and shut up.

We are violating the basic human rights of girls every day when we force them to wear skirts and dresses. It is not the wearing of the skirt or dress that is the problem. It is the requirement that they wear it. The fact that they are not given any other choice, and are in fact threatened with detention if they do honour their distress, or simply exercise their right of choice, and put on a pair of pants or shorts.

The message we’re sending to girls

In asking for what they want, girls step outside the expectation that they should care more about the needs of others. They show up for themselves, and for other girls. They demonstrate courage, honesty, initiative and advocacy – all those things schools tell us they wish to foster in girls. The almighty backlash from schools in the refusal to allow girls to wear shorts and pants however, shows just how far we still have to go.