Prizewinning: Judge Us On Ability, Not On Dress

Your daughter’s about to go on stage for her public school’s awards’ ceremony, everyone should be excited.  Except they’re not, a daughter in tears, an exasperated mother and a principal bursting with anger.  This story shows that even when schools offer uniform choice, the shaming, guilt and pressure  on girls to conform to gender expectations is ever-present.  And girls’ appearance can still outweigh ability.

When schools offer choice – it needs to be authentic and genuine. Girls want to be judged on their ability, not their dress. If they’re winning academic prizes, do we really need to fixate on what uniform they choose to wear?  We should celebrate girls that win school prizes, especially when they take a stand to do so in their shorts and pants.  Girls are telling schools what makes them most comfortable, so they can focus on their education – isn’t that’s what important? 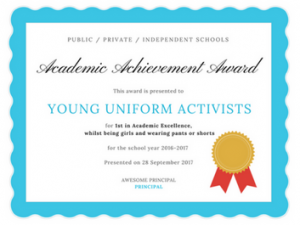 Sad Story of a Shamed Prizewinner

“My daughter’s in year 6 and was one of the students selected to present at the awards ceremony. They had been told that their special year 6 shirts and shorts/pants were what they were meant to wear.

On the day though, when I went to pick her up, I was told that she would be required to wear the school dress. She doesn’t own a dress.  The uniform has shorts and pants as an option for all, so they told her she would have to wear a borrowed dress. I was a bit upset and made a few small arguments at the time, but with another child, I had to get going. It was only two hours until the presentation night and we had to get home to have food and get ready.

At home, my daughter expressed how she shouldn’t have to wear the dress as she hadn’t worn one at all for over two years. She had represented the school in public speaking, chess tournaments, etc. in all that time wearing what the boys wore. So I decided I’d back her choice to wear the same as the boys.

At the Awards’ Ceremony

When we arrived however, she was reduced to tears by the principal telling her that she would not be allowed to present on the stage.  And even that she’d have to go home! I argued the point, indicating the many boys wearing exactly what she was wearing and asking why the uniform was suitable for them and not my daughter.

OMG was the principal angry! Hands clenched at his sides and face turning red with veins popping out angry… In the end, to avoid a scene, he “allowed” her to be on stage daring to wear the “wrong” uniform for her gender.

She was much more comfortable not having to stress about people looking up her skirt as she sat on stage. She went on to receive the academic award for being first in the whole school…

At a meeting afterwards, I was given a copy of the uniform policy (which was not available online and I had not seen before) and the school dress is the only option for formal events for girls. My daughter had worn the boys’ formal uniform for two years without comment or issues. I suggested the policy needed to be changed to be less discriminatory. The principal suggested I propose a uniform change to the P&C.”

Girls Uniform Agenda are working with this family on suggested wording for policy change. We want to give a massive shout-out to this little prize-winner – first in the school whilst daring to wear what she felt comfortable in. A cause for celebration!