Who wears the pants? Whoever wants to! 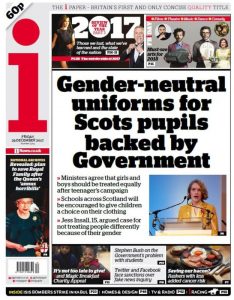 Story from a Young Uniform Activist

Fight for what you believe in, because change is necessary. Young activist Fifteen-year-old, Jess Insall, from Glasgow, Scotland, shows just how simple uniform change can be:

“Instead of saying ‘girls wear this, boys wear that’ schools can simply say ‘pupils may wear either this, or that’.”

Jess shares her story below to inspire other young uniform activists to speak out and stand up for their right to wear pants (trousers):

“In November 2016, I stood outside my school office clutching a small envelope addressed to the headteacher. After spending hours reading books, articles, and campaign materials, I decided it was about time to take action myself. I took a deep breath, and delivered the letter that outlined why I believed giving all pupils the choice between skirts and trousers was a fundamentally good idea.

At first not much happened. I got a fairly positive response from my headteacher, but it was clear that change would take quite some time. I kept writing letters to my school and researching what went on in other schools, both around the country and further afield, and after discovering just how widespread the issue was I was certain there had to be a better way to ensure all pupils have equal access to appropriate uniforms, not only in my school, but across Scotland.

Skip forward to spring 2017, and not a huge amount of progress had been made. I threatened to come in to school wearing trousers, and quickly learned that although it may be appealing, this would push the school further away from me, and label me as an ‘outlaw’. It’s always a good threat to keep on the table, but probably best not to use it. My fellow pupils had mostly very positive reactions, but one problem that still crops up a lot is how quick people are to misunderstand and misjudge the objectives of my campaign, and the reasons behind them.

“Gender neutral” doesn’t mean everyone wears the same uniform. All it means is that instead of making girls wear skirts and boys wear trousers, schools give all pupils the choice between both options.

“I would like to make it very, very clear that this motion is about freedom and choice. It will not affect individuals who do not wish to be affected. Girls can keep their skirts, boys can keep their trousers. All this motion does is ensure that nobody is excluded, disadvantaged, or forgotten about.”

I have explained that in emails, texts, heated debates, casual conversations, phone calls, and a million times on Twitter. When running a campaign, patience is key. Staying level headed, as hard as it is, will always be the best way to get your message across. Success will come when you least expect it, and for me the breakthrough was at the Scottish Liberal Democrat Autumn Conference.

I joined the Lib Dems in June 2017 after campaigning in a hard fought election victory for Jo Swinson. It was the kick in the backside I needed, and when I got a last minute email asking if I wanted to submit a motion for conference, I decided to go for it. My motion, which called for schools to provide inclusive, non-prescriptive, gender-neutral school uniform policies, got accepted, and before I knew it, conference day arrived.

Giving my speech was a surreal experience, and I couldn’t have asked for a lovelier bunch of people to give it to. The buzz was amazing, and after some incredibly inspiring speeches from some of my Liberal Democrat colleagues, the motion passed unamended. The media reaction was what surprised me the most. What I thought would be a fairly uncontroversial motion ended up making it to the mainstream media.

A few weeks later, a journalist from the ‘i’ paper asked if I would be available for interview. I accepted, and although the media can seem daunting, as a campaigner it’s crucial to remember that they play a crucial role in both getting your message out, and furthering your campaign. When I then heard that the Scottish government had backed my campaign, and that the story had made the front page of the paper, it was a bit of a shock!

As a campaigner, I am absolutely indebted to everyone that has helped me along the way, and honoured to be able to fight for this change. When running a campaign, the most important thing to remember is that nothing is ever done single handedly. I wouldn’t have got anywhere if it wasn’t for the 25 Lib Dem members who backed my motion, the friends who encouraged and supported me through the times when I felt like giving in, the amazing members of the Scottish Lib Dem party who voted my motion through conference, and every other person who has been united to fight this worthy cause. The more people you can involve, the stronger your voice will be.

In reality, campaigning can be tiring and difficult at times, but being able to make real change is priceless. With enough effort and determination, you will reach your goals. Plan everything meticulously, but don’t be afraid to step out of your comfort zone. Go out and fight for gender neutral school uniforms, because together we can make this hope a reality.

Extracts from Jess’ speech at the 2017 Liberal Democrats Conference

“The minute a girl walks into primary school, she is shown that boys have more freedom to run about. She is told that whilst she has to wear a skirt, the boys don’t. She is taught to take inequality for granted, and to respect it as the norm.”

“By making uniforms gender neutral, we give them [non-binary pupils] the freedom to decide how to dress appropriately for their personal identity, without limiting schools’ freedom to decide what pupils can or can’t wear.”