The Long and Skort of it

Skorts are not shorts; culottes are not pants.  Seems obvious, but some schools still resist offering the more practical, affordable and comfortable shorts and pants options for girls.  The perfect uniform choices for boys are somehow unsuitable for girls.  Let’s face it – the skort and culottes are often preferred by schools because they look like skirts.  They often do look like a skirt, and are only slightly more functional.  They can be flimsy, floppy and too long.  They often contain so much extra material that they do not provide  protection from underwear-showing, so do not always offer better freedom of movement.  Essentially it’s still about looks over practicality.  The skort and culottes are all about girls still looking like girls.   Here’s the thing: shorts and pants are a great option for girls too.

Only Shorts are Shorts

Girls’ Uniform Agenda has had to fight continuously to add shorts to school uniform options, often facing schools adding skorts and saying that’s the same thing. They are not.  GUA do not want skorts; we want shorts.  As GUA’s co-founder Dr Amanda Mergler says:

“We argue strongly that skorts are not shorts, and that girls must have access to shorts. We feel that skorts are an unnecessary addition that have that flap of material so that girls are still “looking girly” and children are still pigeon-holed into boy or girl, with all the accompanying assumptions.” 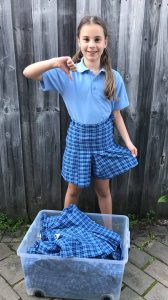 Skorts should always be in addition to, not instead of, shorts.  Culottes are often a more expensive option too.  We’ve heard of schools that went down the culottes path first and ended up ditching them after six months as no-one bought them. Those schools then had to introduce shorts anyway – which the girls are loving!  The culottes meanwhile are languishing in a box, unloved and unused, wishing they were shorts. Schools can save themselves the wasted money and hassle by going straight to shorts.

We are also hearing from parents that schools are making decisions on introducing the skort as their answer to shorts, without proper and genuine consultation of the school community.  We are hearing from parents on the P&C who have been surprised by announcements of the ‘popular’ skort being introduced, without discussion.  As NSW Rep, Alison Boston says:

“The key point to consider is what does the school community want, and are girls restricted compared to boys? Was the school community properly consulted about options and categorically chose skorts? And does the skort restrict girls in ways boys don’t experience? I think that makes it clear that the school would be in breach of Departmental policies by refusing to offer shorts.

Remind your school that skorts are not shorts and if the school community would like skorts, they will need to supply those as well as shorts.”

What the Girls Say

“I tried the culottes and they were hot and all the fabric was really annoying. And, you could still see my undies on the sides of my legs on the monkey bars.”

The bottom line: make sure your school includes shorts and pants for girls, alongside any other options the school community reasonably wants included.  What we need is for girls to have uniform options that allow them to be active, play and learn, and to free them from worrying what they look they when they are busy doing all that.  Shorts and pants work for boys because they are comfortable and allow the full range of movement.  That’s why shorts work for girls too.