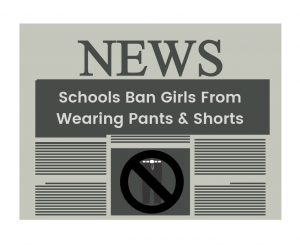 Said no headline ever.

Requiring girls to wear dresses and skirts, with no other options, is a ban on shorts and pants.   We see Australian headlines of schools banning skirts and dresses; and the absolute outrage in the UK following the decision of 40 secondary schools to ban skirts.  We don’t see headlines of the shorts and pants ban for girls.  Yet, girls still can’t wear shorts and pants in schools across Australia, in public and private schools.  Where’s the outcry for girls being banned from wearing pants and shorts?

Challenging The Rules in School

Nothing gets people more enraged than disrupting the status quo.  We hear choruses of ‘Let girls be girls and boys be boys.’  But girls wear shorts and pants outside of the classroom, so it’s unclear why schools insist they must wear a skirt or dress inside class.  The reasons for having pants and shorts for girls are not about gender identity or expression.  Dresses and skirts just don’t allow the same level of freedom that pants and shorts do.  That’s why boys having the option of wearing skirts and dresses is not an equivalent argument.  Yes, children should be free to make their choice on the uniform they are comfortable in.  The problems with skirts and dresses still exist even if boys wear them – they don’t become any more practical, comfortable or wearable.

Skirts and dresses are just not ideal uniform options.  We want kids to focus on their learning and to be active in their play.  Uniforms should be comfortable and practical and stylish.  We should want kids to feel happy in their uniforms.  If the starting point for uniform decisions is what is comfortable, wearable and practical, it’s hard to see how pants and shorts (with functional pockets!) for all students, don’t get a look in.  It’s harder to be physically active in a skirt or dress.  And with skirts and dresses there’s always the constant obsession with ‘modesty’ – with endless scrutiny of skirt length and underwear-showing.

The best reason given for the UK skirt ban was that pupils were questioning why boys and girls wear different clothing.  And really, why should students be forced to wear different clothing options based on their gender?  Pants and shorts are the more practical option.  Surely there wouldn’t be the same resistance to girls wearing pants and shorts, if, as a society, we obsessed less with gendering everything and fixating on gender-markers – in particular on what girls look like.

The worst reasons given for the UK skirt ban were to stop sexual harassment and an apparent pre-disposition of boys to take photos up girls’ skirts.  We can’t ‘ban’ uniform items in the hope it addresses underlying problems.  Those issues need to be dealt with.  Sexism, gender inequality, sexualisation, objectification, girls being judged on their appearance, body image, body shaming, girls being active, protecting ‘modesty’, upskirting – cannot be ‘fixed’ by changing uniforms alone.  We need education on respectful relationships, gender equality, health and well-being, empowerment too, to make sure the complex lessons are being learnt.

Until we’re beyond gendering clothes, past needing our school kids to be identifiably ‘girls’ and ‘boys’; until we’re genuinely inclusive and focussed on the person, not an assumed gender, schools need to offer choice.  Let students pick between the uniform options, irrespective of gender.  Schools need to be promoting and encouraging the benefits of pants and shorts, and allowing choice.

It’s hard to see who loses if girls have the choice of wearing shorts and pants; girls can move as freely as the boys next to them.  As more and more girls choose shorts and pants and normalise it as school uniform for girls, the uniform becomes more inclusive for all pupils.  The dress and skirt would not be synonymous with girls; pants and shorts would not be synonymous with boys.  It would be kids in their school uniform, whatever they choose that to be.

The main opposition to girls wearing shorts and pants to school boils down to people wanting to:

News reports on the UK skirt drama included a ‘concerned mother’ that “feared that female pupils were being treated as though they were gender neutral and the ‘female brand’ was being eroded.”  This mother was quoted as saying: “I worry if this is continued to be accepted, then what’s coming next? Short hair for everyone?”   I’m not sure what that ‘female brand’ is, but hair is hair, clothes are clothes and it’s up to an individual, including children, to make the choice on how they express themselves and how they identify.  Many students who identify as girls, do have short hair, because hair length does not determine your gender.  It’s time to accept, acknowledge and embrace the vast difference that has always existed within, between and across gender.

Uniforms That Students Want to Wear

Finding the perfect uniform that every student loves is unrealistic, but it’s important to involve students in choosing options they want, and are proud to wear.  Schools could choose to focus on colour rather than prescribing style, so school kids can find a fit that works for them.  Clothes impact on how we feel; it’s completely reasonable for school kids to want to look decent in their school uniform.

Let’s shift from talking about a ban for either skirts, or pants and shorts and start looking at how uniforms can truly be a leveller.  Give girls choice, give boys choice, give every school kid choice because uniform-wearing should not be a distraction, but an enabler for learning.