Time to Change – Girls’ Uniform From a Teacher’s Perspective 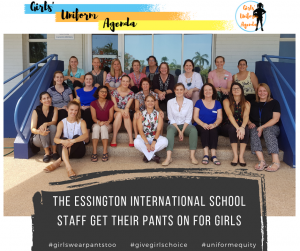 I work as a teacher in a non-denominational private school, which caters for learners from pre-school to year 12. The early learning unit is based on a modern Montessori method of teaching and learning. The Montessori Method of education is based on self-directed activities with hands on learning where children make choices and develop their potential. With the Montessori approach in mind, I find the uniform options for the girls in my class contradictory to this philosophy. I teach first year of school, with children who are 5 to 6 years old. The girls only have one uniform choice, a pinafore (like a dress) with a blouse underneath. On sports day, they have a separate uniform, which is a polo shirt and shorts, the same for both genders.

I have asked a number of girls which uniform they prefer and why, and all stated that they prefer the sports uniform, because it feels nicer and softer on their skin. Students commented:

“When you run, the sports uniform is more comfortable than the dress.”

“I like the sports uniform. It doesn’t show your undies.”

“I like my sports uniform because I can do cartwheels and handstands.”

My Day as a Teacher

Let me give you some examples of how I spend a large portion of the four days each week that the young girls in my class come to school in their pinafore and blouse:

Girls and Their Uniform

Boys and Their Uniform

Want to know about the conversations I have with boys around their uniform, which is shorts and a button-up shirt?

That’s it!  I am also constantly reminding boys to not look under girl͛s dresses and comment on their underwear.

Do You Get The Message?

By forcing girls to wear a dress or skirt in the classroom, and refusing them the choice of shorts and pants, we send a very clear message –being a girl, dressed in appropriate ‘girls’ clothing, is more important than her wishes, her comfort, and her ability to play. She is confined by outdated social rules which may limit her learning, her individualism, her potential, and constrain her social interactions. By refusing to give girls a choice as to which uniform they wear we perpetuate the idea that it is okay to discriminate against some children. And as girls experience the struggles they face in their clothing, struggles that boys simply do not have, they learn that it is normal that they be disadvantaged, while boys be respected.

It’s more than time to defy expectations about what we are ‘supposed’ to wear because of our gender. Our modern-day world encourages forward thinking and the pushing of boundaries – this is how we grow, develop and transfigure society.

Spread the word far and wide. If you are a teacher, discuss, debate and draw attention to this agenda in your classroom and staffroom. At my school, we recently had a day of action where female teachers came to work in their shorts and pants, and we took a photo to share with Girls’ Uniform Agenda to help spread the word.

With our combined effort, we can create the change our girls so desperately need us to create. In having choice, we have freedom; the freedom to be who we are, to express ourselves vocally, artistically, physically, spiritually and emotionally.  Children need the freedom to focus on being a child. To freely explore all that childhood has to offer without the constraints of clothing which restricts and undermines them. Boys’ uniforms largely allow them to do this, while girls’ uniforms largely do not.  Isn’t it time for change? 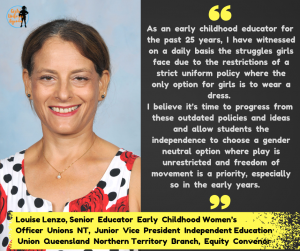