The Dress Trap – Equality and the School Dress

We’re a long way from achieving gender equality however you look at it.  When we ask young girls what they think, they say they feel judged on their appearance and don’t feel equal to boys, not even at school.

“More than half of Australian girls report that they are most often valued for their looks, not their brains and ability.”

Schools give these reasons for dress and skirt only uniforms:

Girls: we don’t want to be judged just on our looks

Schools: we want you to be judged on your looks 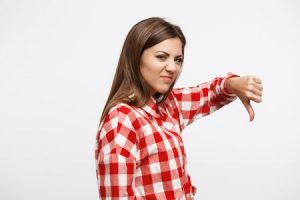 Telling girls what to wear and how to wear it

Or schools make dresses and skirts so long, to protect that ‘modesty’, or so sack-like, to preserve ‘modesty’, that they’re not practical, comfortable or easy to move in

Would there be these problems if girls had the option of pants and shorts?

Schools impose rules on girls’ behaviour and in the process restrict their choices and their movement. It’s a list of instructions that tell girls clearly how they are expected to behave.

What these schools are teaching girls

Schools are saying to girls that it matters what they look like.

Schools are saying girls’ appearance matters more than any other value.

Schools are telling girls that they need to protect their modesty, to not show their underwear whilst playing, to not serve as a distraction to their male peers or teachers…even though they are told they must wear a dress or skirt.

Schools are discouraging girls from playing, moving and being physically active.

Schools are telling girls to not challenge the status quo, to not fight for their right for choice, to not stand-up and disagree.

Schools are preparing girls to be well-behaved, lady-like, complicit, to do what they’re told.

Schools are telling girls to ignore their discomfort. 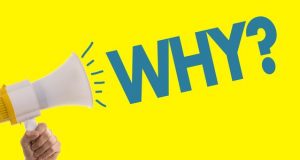 Preparing schoolgirls for their future

Society tells girls that they will be valued on how they look and judged on their appearance. We want our girls and young women to ‘look like girls’, to ‘look pretty’.

Society tells girls that they are responsible for their objectification; they are accountable for how they dress, for how they attract the male gaze. They will be judged for their clothing choices and blamed for whatever happens to them whilst wearing it.

Society tells girls that they’re not as good at sport.

Society tells girls to not challenge the status quo, to not fight for their right for choice, to not stand-up and disagree.

Girls should be lady-like and boys should be leaders. That’s how it’s always been…Girls’ comfort and education does not matter as much as for boys.

There are more important things to worry about

It may seem a small thing, something that doesn’t really impact on the quality of education provided by a school. It’s these small things that can make a big difference to individual girls. It’s letting these ‘small’ things slide that stops girls from being seen equally to boys. It’s saying ‘this isn’t a big deal’, ‘it did me/my daughters no harm,’ ‘why are we still going on about this?’, which leads to another generation of girls taking second-place to boys. While their appearance matters more than it does for boys, girls are being held back. 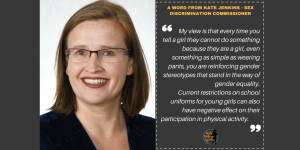 What’s wrong with pants and shorts for girls?

There are many ‘modesty-saving alternatives’ proffered: the skort, culottes or bike pants. We should question why girls need to ‘look’ like girls when we want their primary focus to be on their education. We should definitely question uniform options that require girls to wear an additional item of clothing to make them ‘decent’. If shorts and pants are smart, comfortable and practical enough for boys, they sound a great option for girls too.

It’s about equality, it’s about fairness

Girls wearing pants and shorts to school is about equality and fairness. It’s not about gender identity; it’s not about taking gender away from girls; it’s not about making girls into boys or stopping girls from wearing dresses if they choose too. It’s about not discriminating against girls and disadvantaging them.

All schools should want to make equality a non-negotiable principle.  Schools are a microcosm of wider society. If schools modelled a world where girls were seen equally to boys and for more than just their appearance – maybe we could be closer to gender equality in the ‘real world’ too.